Neoteric is the original light hovercraft manufacturer and THE GATOR™ is the culmination of Neoteric's 50+ years of experience in light hovercraft design, development and engineering. Its design embodies all of the advantages and advances Neoteric has innovated-side-by-side seating, fully enclosed cabin, highly developed reverse thrust for braking and maneuverability, more cockpit room, increased thrust and low weight. Great efforts have been taken to ensure the Gator's aesthetically appealing military looking profile and camouflage design. Engineered to satisfy expectations and to give long life and value , The Gator™ is the industry standard for Rescue and Military light hovercraft. This hovercraft is the only vehicle able to perform fast, safe operations on swift water, thin or broken ice, snow, mud, swampland, and flood waters. Because it safely hovers 9 inches above the terrain, a hovercraft keeps military personnel above the danger - not in it - and allows them access to areas that helicopters or boats cannot reach.

Neoteric's innovative reverse thrust system, patented worldwide, makes THE GATOR™ by Neoteric Hovercraft, the only hovercraft in the world with effective brakes and the unique ability to brake, hover in place, and back up at more than 25 mph. Neoteric hovercraft are also the lightest and quietest production hovercraft in the industry.

Neoteric has a level of experience and professionalism superior to any other light hovercraft manufacturer. When the U. S. Coast Guard surveyed marine craft manufacturers, they discovered that most of them had no engineers at all, while Neoteric has been founded by a team of Engineers. This is why they consistently produce hovercraft that are innovative and a standard in the industry. 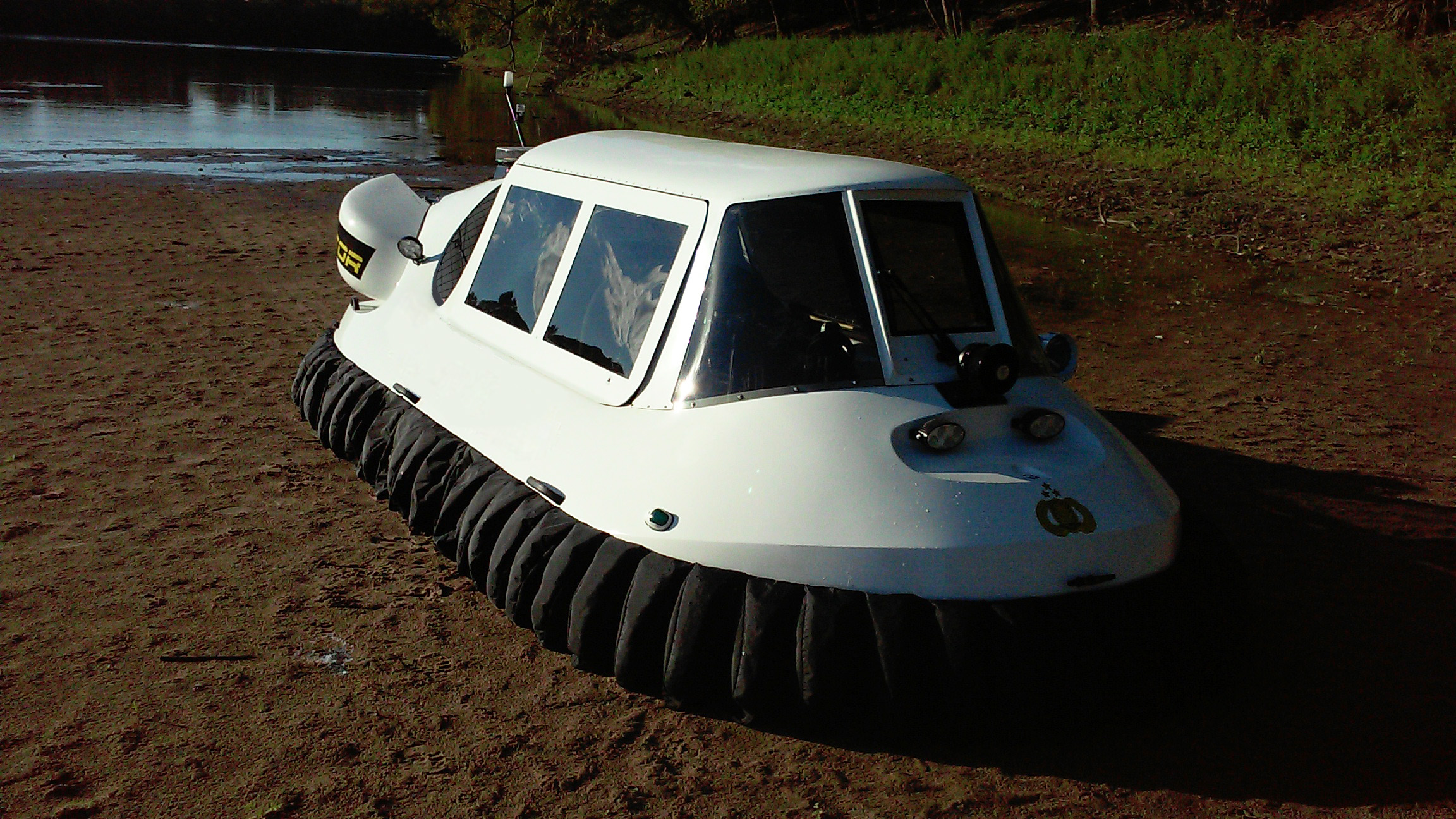 THE GATOR™ model is also custom-built with advanced parts and materials such as:

These light-saving parts and materials not only make the hovercraft lighter and more efficient, they also provide increased strength, improved performance, aerodynamics, durability and safety.

Also included in THE GATOR™ Model:

Patented worldwide, this system provides all Neoteric hovercraft models with superb maneuverability for reversing, yaw, spinning, braking, maintaining lift cushion downwind at speed, and is absolutely essential over ice and rapidly flowing water. Delivering 60% thrust when reversing, the Neoteric reverse thrust system is well ahead of jet aircraft in efficiency, in that they typically deliver a mere 18%. THE GATOR™ is so efficient that it can achieve a speed of 25 mph (40 km/h) in reverse.

Having a smaller fan than any other hovercraft manufacturer's, the thrust is nearer to the traveling surface. This enables Neoteric hovercraft to remain level (trimmed) even as thrust and engine speed change. It also provides improved banking for turns, ameliorates fan torque, which causes other hovercraft to roll to one side during acceleration, and renders the machine more stable than those with larger fans.

Stationary blades behind the fan straighten the turbulent air flow so that it crosses the rudders evenly. Neoteric's one-of-a-kind stator system makes rudders 100% effective, left or right. They improve the efficiency of the lift system, the reverse thrust system when fitted, and cause an increase in the amount of thrust.

LOWEST PROFILE AND CENTER OF MASS

Each Neoteric hovercraft is individually crafted from carefully chosen materials and components to ensure a high degree of quality and performance. The use of fiberglass composite urethane and PVC foam core construction rather than thermoplastic, results in a lightweight, rigid and durable craft that can easily be repaired.

THE GATOR™ has an exhaust system that defies extremes in air temperature and air density. This improves engine performance in hot or cold climates and at varied altitudes.

Wide, smooth skids run the full length of THE GATOR™, providing it with the capacity to land safely in any direction at any speed. It also keeps the hull from digging into the terrain. Constructed of thick and renewable composite fiberglass, the skids are extremely strong, have a long life expectancy, and are designed to match the rollers of the ingenious Neoteric trailering system.

With a normal load, Neoteric hovercraft are properly trimmed, maintaining an even hoverheight. Inferior designs have nose-up trim, which causes uneven skirt wear and increased drag and spray.

Instead of requiring constant manual pressure on the throttle, Neoteric hovercraft allow the pilot to relax by setting the proper tension in the adjustable BMW cruise throttle.

Rather than having to manipulate the choke on the engine module, Neoteric has adapted a BMW choke control which operates easily from the handle bar.

THE GATOR™ features analog gas gauge, cylinder head temperature gauge, exhaust gas temperature gauge, hour meter and tachometer so the pilot can see the needle positions and note changes at a glance; something impossible to do with digital instrumentation, especially in bright sunlight, where all one sees is a series of dimly flashing numbers. The rate of change is readily apparent too. As another convenience, for night use, most instruments are illuminated.

All hovercraft generate a fine mist or spray that can be blown back on the passengers. THE GATOR™ windshield deflects spray around the front of the passenger compartment, keeping everyone drier.

Due to Neoteric's engineering expertise, THE GATOR™ is the quietest production hovercraft in the industry. This is the result of the adoption of a slow fan tip speed and minimal clearance between fan and intake ducting.

One 114 mm diameter drain plug is effective when draining the hovercraft while cleaning or for a fast remedy after taking on water.

In the event that a skirt needs replacement, simply slide the new skirt into the slot along the craft's edge. No mechanical fasteners are needed, which also results in a smooth, sleek, uncomplicated appearance.

Occasionally, hovercraft will plow into the water, sometimes ejecting passengers. Neoteric has developed an antidive, antiplow hull to minimize the chance of this occurring. The hull merely kisses the water and bounces back up.

When floating in water, the buoyancy of a raft-like, solid urethane hull provides a high degree of stability, enabling passengers to move about on a level surface. Its actually possible for two or more people to stand securely on the side of the craft without tipping.

To prevent the ingestion of foreign objects that could damage the engine, fan, transmission and stator blades, the entire machinery module is covered with a wire mesh that can easily be opened for maintenance by lifting one, over-center, stainless steel latch.

When skirts become damaged, there is a loss of cushion air and therefore, hoverheight. This reduces the craft's performance and maneuverability. Neoteric's patent pending design minimizes air loss, which helps maintain the hovercraft hoverheight and ease of operation, even if extensive skirt damage has occurred.

With Neoteric's trailer system, one person can load and unload the hovercraft. Simply winch the craft on to load, or lift the trailer hitch to roll the hovercraft off. Static loading produces less noise and dust...a real benefit at crowded launching ramp or parking lot.

Unlike other trailers that have a flat, solid deck, the winch-on Neoteric trailer is completely open, allowing convenient skirt and underhull inspections and maintenance.

Weighing less than 190 lb (86 kg), Neoteric winch-on trailers are easily stored on their side to save space, and require less energy to tow than other trailers.

A spare tire is situated on the front of the trailer for easy access when needed.

Accommodations
Upholstered in-line seating for 6, with large capacity. Two lift up lid storage compartments under seat. Optional 2 plus 2 plus 2, side-by-side, bench seating, with front seat and controls movable side-by-side, and fore & aft for trim and access. Windshield and optional full cabin enclosure for cold weather operations, cabin doors are 64 1/2 in wide (1638 mm) and 26 in high (660 mm).

Options
A range of more than 70 options include Reverse Thrust System, Side by Side Seating Cockpit Enclosure, GPS, Hover on Hover off tilt trailer, etc.
Specifications are based on standard air temperature and pressure with no wind.  For operation at abnormal altitude and temperature, consult Neoteric. Notice is not given when specifications change.